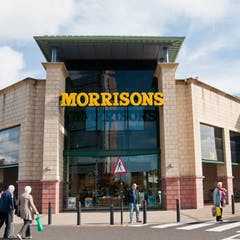 The share price of UK supermarket group Morrisons has jumped by over 30% after a US private equity firm made an offer to buy it for £5.5 billion. The bid by Clayton, Dubilier and Rice, which is being advised by former Tesco chief executive Terry Leahy, was rejected as Morrisons believes the business is worth more. But there is speculation that it may prompt others to bid – including Amazon.

Morrisons is the UK’s fourth largest food retailer after Tesco, Sainsbury and Asda, holding a 10.5% share of the market. Founded by William Morrison in 1899, the Yorkshire-based company grew under the leadership of his son, Sir Ken Morrison, listing on the London Stock Exchange in 1967.

Morrisons further expanded in 2004 with the £3.3 billion acquisition of rival Safeway. Now run by former Leahy lieutenants David Potts and Andy Higginson, it has around 500 stores nationwide. Unlike many retailers, Morrisons did not have to close in 2020-21, but while its sales went up, annual profits have fallen because of costs associated with the pandemic.

State of the market

Nonetheless, Morrisons is a perfect target for any overseas company looking to gain a share in the UK’s £230 billion grocery market. The market has seen slow but consistent growth over the last few years and has had to respond to changing consumer demand for more online shopping and new technologies such as automated ordering using artificial intelligence.

Morrisons had previously been reluctant to be part of these changes, preferring to concentrate on traditional principles that always worked well for it. The group did enter the online market in 2014 through a tie-up with Ocado, but would have been held back by the fact that orders relied on what was in warehouses and not on supermarket shelves. Having started a deepening partnership with Amazon in 2016, it is gradually becoming a more serious online player.

More generally, the Amazon partnership has been a bright spot for Morrisons during the pandemic. The US online retail giant has been selling groceries to its UK-based Prime subscribers through Morrisons’ online platform, for example, and providing lockers for Amazon deliveries in Morrisons stores.

Amazon has also grown its bricks and mortar retail business in recent years with its acquisition of Whole Foods in 2017 and its recent launch of three Amazon Fresh till-free stores in London. Buying Morrisons would give it a much stronger foothold in the UK grocery market, and enable it to swiftly expand.

Morrisons is a trusted and stable contributor to the UK grocery sector, and has invested heavily over the last few years in both its retailing and wholesaling arms. Stores have been refreshed with everything from the local-market-style Market Street counters through to new trollies in car parks.

On the wholesale side, Morrisons is the UK’s second largest fresh-food manufacturer after 2 Sisters. By supplying not only its own stores but other retailers such as newsagent McColls in recent years, it has made the whole system more productive. Amazon would therefore be buying into a supply chain that goes well beyond stores – much more so than Morrisons’ rivals – and an estate that covers the bulk of the UK even if it is predominantly in the north of England.

Amazon would add an abundance of cash to invest in the business, which would mean the potential for more stores in the south of England – particularly in the south-east, where Morrisons’ presence is scarce.

Amazon would also bring new technologies through its established online platform. For example, Morrisons would potentially benefit from Amazon’s strengths in using algorithmic stock-ordering. Amazon would also be very likely to further develop the online business and provide a faster and more efficient service across the country as a result. At present, not all areas of the UK have access to Morrisons online, so this would be a big shift.

This all has the potential to shake up a sector where the top four have not been allowed to buy one another, and which has stayed fairly constant for several decades. The main issue in recent years has been the rise of German budget operators Lidl and Aldi.

Any Amazon takeover will raise questions about workers, given the endless media questions about the conditions in its warehouses. But in terms of shopping experience, consumers will clearly benefit from a takeover. It would help Morrisons to attract a younger shopper base that fully understands the online space. It would be another step towards an Amazon ecosystem in the home, where consumers get whatever they want when they need it from the online giant. The likes of Tesco and Asda might finally have met their match.

Jarrett - April 5, 2022 0
If you're looking for the best mens running shoes, you've come to the right place. The right footwear can make all the difference in...

Jarrett - February 19, 2022 0
Highlights refer to hairpieces that are lighter than your hair’s natural color. For instance, if your base color is brown, you can highlight it...

If Amazon buys Morrisons, it could be a win for consumers and a major...

Jarrett - September 26, 2021 0
The share price of UK supermarket group Morrisons has jumped by over 30% after a US private equity firm made an offer to buy it for...