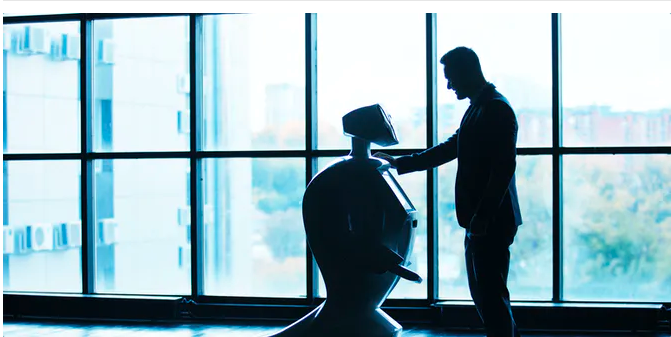 Many TV shows have a scene where a customer attempts to buy a potentially embarrassing product – a pornographic magazine perhaps or a diarrhoea treatment – only to have the assistant loudly check the price or ask questions for other people to hear.

Situations like this do happen in pharmacies and other shops. And they tend to make people squirm. But, what if they could interact with a robot instead of a human employee? In our recent research my colleagues and I found the use of robots, rather than people, as assistants may reduce people’s feelings of embarrassment. In one experiment, we asked 170 participants to imagine they were in a medical clinic to book a visit for a haemorrhoid problem. Half of them imagined speaking to a human receptionist and half to a robotic receptionist. We measured people’s level of embarrassment in that situation and we found that people felt less embarrassed when they had to provide information about their medical condition to a robot rather than a human receptionist.

Humans tend to feel embarrassed when we are concerned about what other people may think or feel about us. Other research in consumer behaviour field has shown that the mere presence of others, even when only imagined, is enough to elicit embarrassment.

Read more: Robots were dreamt up 100 years ago – why haven’t our fears about them changed since?

Get news curated by experts, not algorithms.

Our research found that people don’t feel embarrassed with robots because they don’t believe that robots can form judgements or display emotions. In our second experiment, we asked participants to imagine they were in a pharmacy to collect an anti-fungal treatment. As in the previous study, we split the groups up, so half imagined speaking with a human pharmacist and the other half with a robot. We then measured not only how embarrassed they would have been, but also how much they thought that the robot had specific mental abilities such as emotions and judgements. The participants felt that as robots lack both of them they wouldn’t be able to hold opinions.

Recent versions of humanoid robots such as Sophia are capable of emulating a wide range of human expressions, and we even humanise them by giving them names. Despite this our research group found that participants felt robots did not judge their behaviour.

Take Curly, a robot designed to play curling, a sport where players slide stones on a sheet of ice toward a target area. When, last year, Curly won against the curling’s human elite team, it did not win on purpose. It just played the game it had been programmed to play, indifferent to whether it was playing it any better or worse than anyone else.

This inability to judge our behaviour is what makes robots the preferred option in embarrassing situations.

When interviewing people about embarrassing situations, we also found they preferred robots because you could not meet a robotic assistant on the street after an embarrassing purchase, and that people worry about these things.

When asking robots embarrassing questions, we also do not risk the uncomfortable small talk that we might have with humans.

Taking humans out of a situation has been used to reduce embarrassment in the past. For example, consumers can purchase products such as condoms and tampons from vending machines, avoiding awkward interactions in stores. A recent survey discovered that consumers are willing to pay more for personal hygiene products online, just to avoid the embarrassment of buying in a store.

Robots might not gossip about us but they do collect more data than a human ever could – and they store it for longer. In the research participants did raise concerns about privacy and robots storing their data, but many felt they already handed over a lot of personal information every day via their phones and therefore didn’t worry about it too much.

The use of service robots is rising today and sales of robot technologies are projected to reach US$912 million by 2026. The pandemic has also accelerated the deployment of these technologies, and with them a significant loss of jobs around the world. Only in the last year, the number of robots adopted in hospital receptions, hotels, airports and restaurants increased considerably.

Although many of us worry about losing our jobs to robots, and millions of jobs are being automated, in cases like this it turns out we may prefer to have robots do certain parts of the role of sales assistants. But that’s not to say we would like all parts of the job to be performed by a machine, many people would undoubtedly miss the one-to-one contact and warmth that a human pharmacist can offer if they popped in for advice.

Jarrett - May 23, 2021 0
In 1969, Don Fisher was having difficulty finding the right size of Levi’s jeans in traditional clothing stores. His solution was quite radical. Together...

A good job for robots, found – dealing with our embarrassing problems

Jarrett - June 6, 2021 0
Many TV shows have a scene where a customer attempts to buy a potentially embarrassing product – a pornographic magazine perhaps or a diarrhoea...

How clothing giants Gap and Benetton once ruled the fashion high...

If Amazon buys Morrisons, it could be a win for consumers...